I'm sitting in the Atlanta airport on my redeye flight home trying to catch my breath from the excitement of the last 48 hours. I'm returning from the 2013 Salesforce MVP Summit and struggling to capture all of the thoughts and ideas swirling around in my head. Salesforce flew all 75 or so MVPs out to San Francisco to provide us with an extremely confidential roadmap of their next 3 releases. They wanted our feedback as much as we wanted to hear about what is coming down the road.

So what can I tell you about features coming to the platform in the next 3 releases? Unfortunately, nothing. Wish I could because they are #awesome but I can't. Sorry. We were sworn to secrecy and a Facebook and Twitter embargo is in place. There were threats of yanking out finger nails and first born children being surrendered. This led to some great tweets such as: 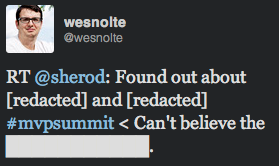 Why was this Summit so awesome? Because Salesforce honestly values the MVP community. They made key members from their senior management and product teams available to us for the entire day. There was an extremely honest and frank discussion (both ways) on what is great about Salesforce.com and where it needs improvement. The conversation got heated at times as everyone is passionate about the platform and only wants the best for it. I made the comment to Erica Kuhl that I think Salesforce.com got as much out of this meeting as the MVPs did. Honestly, Salesforce.com should be listening to us. We are dedicated, hardworking bunch of ISVs and consultants (there are 8 MVPs alone from Appirio!) dealing with customers every day and we can provide direct feedback on what we see in the field. Parker Harris made the comment that he didn't want us to tell him how great everything is. He wanted to honestly know where Salesforce.com sucks. This was remarkable. I used to do SAP consulting and good luck finding anyone at Waldorf to listen to you let alone to provide you with information. Hell is still fairly warm I suspect.

First of all, Erica Kuhl and Matt Brown who run the MVP program did a fantastic job! Everything was well planned and thought out. It was great once again seeing the friends I'd made over the last 3-4 years in the community. Sure, you can stay in touch via email, twitter and facebook but nothing beats getting people together in one place from all over the globe with a common cause. It was an absolute blast just hanging out with everyone and meeting the new MVPs! 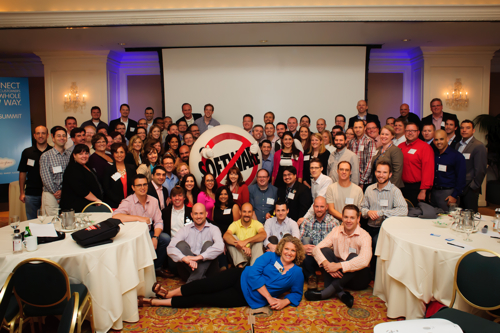 Erica and Matt put together a great mix of speakers. Each team presented their internal roadmap for the next three releases, elaborated as much as the safe harbor allowed them and always took questions. We had presentations from Mike Rosenbaum (Executive Vice President Platform) and Alex Dayon (President, Applications and Platform) on the platform in general (mobile, aura and canvas are going to be big!), Sales and Service Clouds (kick ass new stuff coming out!), Trust and Security with an awesome demo from Chuck Mortimore (this new stuff will blow your mind!), Dreamforce events (the app this year is sweet!) and of course Support. Charles Warren & Dan Darcy's UI team was the star of the show with their workflow demo that blew people away. Throughout the day there were spontaneous shouts of "OMG", audible gasps, clapping, standing ovations and comments like "this will change my life!". At one point I thought Miley Cyrus was going to pop out and start twerking but it was Sassy instead making an appearance. Crazy day!

Parker Harris and Peter Coffee were there from sun up to sun down with us and everyone was highly approachable. I had the opportunity to have lunch with Peter Coffee and spent about 30 minutes talking with Parker. Both of them are super cool, regular guys. I confirmed that Parker did receive the copy of my Salesforce Handbook that I sent him. I assume it's sitting prominently on his desk or bookshelf as a prize possession! (That's how I picture it in my mind at least.) I also had an extremely long one-on-one conversation with Paul McNamara (VP of Platform Products) where we picked each other's brain about the platform. I really like this guy. I also spent about 20 minutes with Steven Tamm (CTO) just rattling off features that I wanted to see on the platform. He had great feedback for each one of my ideas like, "it's coming.... we don't do a good job on that.... on the roadmap.... coming but harder than it looks.... done! .... done!" I absolutely love Steven as he's no bull and tells it like it is... good, bad or ugly. Apparently the guy's got some mad tech skillz as well as he still writes production code.

Other notables that were there most of the day included Shawna Wolverton (Senior Director, Platform Product Management) aka "the person that gets $h!t done at Salesforce", Alex Toussaint (Sr. Director Product Management) who is ALWAYS working on fun new stuff, Taggert Matthiesen (Senior Director, Analytics) former Apex and Tooling API PM that is now heading up some mind blowing stuff with Analytics (his demo totally killed ... just wait for it to come out!) and of course Dan Darcy who now leads the UI team. We were lucky to have Dan there as he was able to provide Taggert with some guidance on how to drive a demo and adjust his screen resolution for optimal viewing. 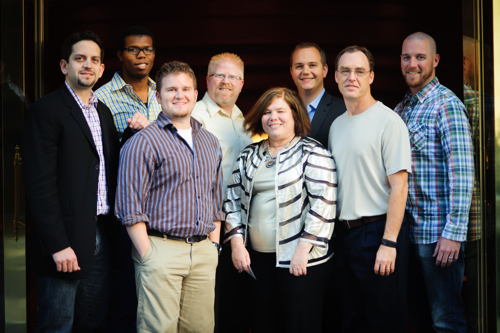 I can't say how thrilled and lucky I am to be part of the Salesforce community! I'm looking forward to next year's MVP Summit and meeting all of the new faces from the community! BTW, if you haven't purchased your ticket for Dreamforce yet, DO IT NOW! It's gonna be #superfrickinawesome.

DF13 Session Recap - Build your API with Force.com and Heroku